Athletes and physically active people are always searching for new ways to enhance their performance and protect their hard-earned physical gains, so we take a look at how the supplement Echinacea might help?

Commonly, athletes and coaches discuss how different training and nutritional manipulations can support athletic development and lead to improved physical performance. The macronutrients (fats, carbohydrates & proteins) are regularly critically evaluated, however the roles and functions of micronutrients like echinacea are often overlooked. With the recent release of TORQ’s Immune Support Range, we feel it’s relevant and appropriate to explore in greater detail, how the different micronutrients in our dFND and aTAC products might support general health, wellbeing and exercise performance, as well as immunity.

Echinacea supplements are derived from a group of flowering plants native to North America of which there are nine variants in total, however only 3 are used for medicinal purposes (Echinacea purpurea, Echinacea angustifolia and Echinacea pallida). Echinacea is one of the key functional ingredients found within our TORQ aTAC product and is generally advertised in the marketplace as a herbal remedy used to treat the symptoms of the common cold and flu. Athletes and physically active people commonly find themselves at increased risk of becoming ill due to high volume or high intensity training sessions which can impact the body’s ability to fight infection. Athletes may also find themselves exercising in environments like gyms which are commonly used by many other people, increasing the risk of cold and flu transmission. According to David and Cunningham (2019), as more athletes aim to support their physical training with a healthy and clean diet, the search for natural remedies to support immunity is on the rise. Medicines clearly have their place in society, but providing immune support through natural means is clearly something that’s accessible to everyone with no stigma or perceived risks attached.

Echinacea has been shown to support immunity via the increase in effectiveness of the mucosal barrier, which is the first line of defence against pathogens entering the body. The mucosal layer is a “sticky” layer of saliva that lines the mouth, throat, pharynx and larynx. This salivary, mucosal layer is a physical defence mechanism acting literally as a wall between antibodies and porous bodily tissues that viruses and bacteria can pass through, making us ill. Echinacea has also been reported to positively impact cellular immunity, by increasing the activation of cytokines and lymphocytes which are key to the white blood cells’ capacity to attack illnesses circulating throughout the body (Hall et, al. 2007).

To try and develop a better understanding of how echinacea may play a role in this defence mechanism, Hall et al (2017) explored the effect of echinacea on the production of an immune factor known as Immunoglobulin A (S-IgA) and its impact on mucosal defence against upper respiratory tract infections (URTI). The findings from this study highlighted two very positive factors. The first noting that after strenuous exercise, whilst supplementing with echinacea, concentrations of S-IgA did not decrease and therefore it could be summarised that supplementation with echinacea supported mucosal defence barriers. Secondly, although the number of participants who experienced symptoms of a URTI were the same between the echinacea supplementation and non-supplementation groups, participants who supplemented with echinacea found that the duration of the infection was significantly reduced from 8.6 days to 3.4 days respectively. Increasing a physical barrier against infection has important implications when working with endurance athletes. Endurance athletes often work at high exercise intensities which involves rapid breathing rates. The more air that is inhaled per minute, the more likely it is for an athlete to be exposed to pathogens, especially when training indoors with many other people such as in gyms or in spin or circuit training classes. Also, according to research by Oniszczuk et al (2019), echinacea has been shown to increase the production of a molecule called IFN-g, which is strongly associated with the stimulation of macrophages. These are cells found in the bloodstream responsible for the detection and destruction of pathogens that have entered the human body, or even developed from within the body as a result of an attack on healthy cells by substances called ‘free radicals’ generated through strenuous physical exercise. Free radicals are scavenger molecules and they are neutralised by substances called ‘antioxidants.’ With this understanding of how echinacea can stimulate macrophages, it is easy to highlight a correlation between increased macrophage activity and a reduction in free radical damage from infection or exercise. Macrophages essentially increase in circulating antioxidants and protect us from illness. Vitamin C  for instance is a very powerful antioxidant and we discuss the benefits of this nutrient in detail in our Immune System Support resources, so please give them a read.

The effectiveness of echinacea stems further than just treatment. Research has also aimed to explore the role echinacea supplementation might play in the prevention of the common cold. Schoop and colleagues (2006) explored the effect of echinacea on the prevention of symptom development after participants of a controlled study were inoculated with a common rhinovirus. Analysis of this paper established that those who did not supplement with echinacea were at a 55% greater risk of developing symptoms of the clinically controlled, inoculated rhinovirus. This is important to the context of a training athlete, as it would suggest that when supplementing with echinacea, an athlete would be greater protected against illness and therefore able to maintain a greater overall training load, leading to enhanced training adaptation.

Although echinacea has been used by native Americans since the 1600’s as a herbal remedy, there are many areas of research yet to be fully investigated, including the relationship between echinacea supplementation and health. Research has started to explore the effects of echinacea on health conditions such as inflammation, oxidative stress, fungal infections attacking human skin, viral defence, and interestingly reduction of symptoms of mild anxiety. It is worth noting however that studies investigating these areas are very much in their infancy, with researchers only recruiting a small number of participants within each study. It is also important to note that although the participants may have felt or perceived a benefit from supplementing with echinacea within the diet, the effects were not deemed scientifically significant. This does not mean that the effects of echinacea on the health conditions were not valid, but it does suggest that more studies are required to develop a greater understanding of “if” and “how” echinacea may offer beneficial effects beyond immunity.

Research exploring echinacea is constantly evolving and we will ensure that we stay up to date and provide updates on any new findings as they emerge. It’s clear that there are a number of immunological benefits to supplementing with echinacea from both a prevention and cure perspective and although we wouldn’t for a moment suggest that this nutrient is your ‘one stop shop’ for immune support, it should certainly figure as part of an overall immune health strategy. Most importantly echinacea does not lend any adverse side-effects that some pharmaceutically engineered drugs may present on training or adaptation responses.

To learn more about the role that echinacea can play alongside other micronutrients, the timing of ingestion of larger macronutrients and your training/recovery behaviour, please take the time to read our comprehensive Immune System Support resources. If you have any further questions about this article or any other subject, please don’t hesitate in contacting us at enquiries@torqfitness.co.uk or phone 0344 332 0852.

David, S. and Cunningham, R., 2019. Echinacea for the prevention and treatment of upper respiratory tract infections: A systematic review and meta-analysis. Complementary therapies in medicine, 44, pp.18-26. 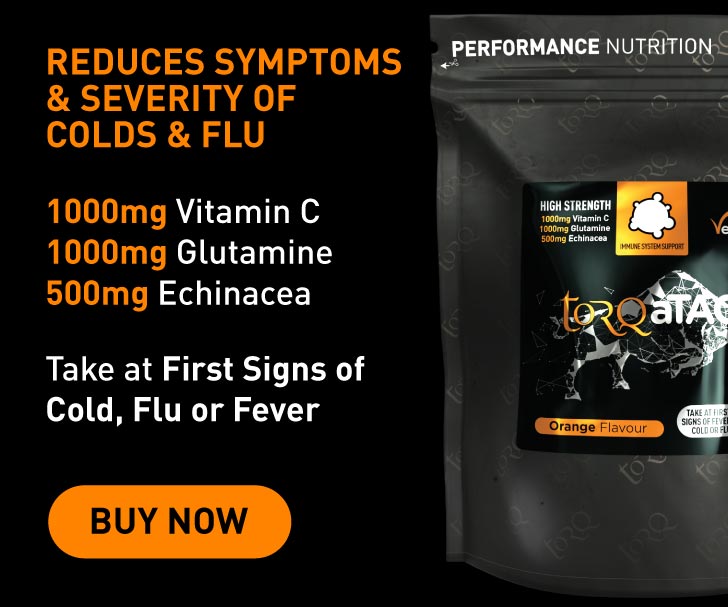